The string data is used to hold a sequence of characters that can consist of numbers, alphabets, special characters (symbols) or all of them.

A variable is said to be a string if it is enclosed within double quotes (“”).

You can concatenate the value of Mar-1997 from the first three letters of the month and the year like “Mar-1997”.

Here are some string operators such as:

1. Concatenate (&): This operator is used to concatenate the two strings or values together.

Note: Concatenation operator can be used for the numbers as well as strings. The output depends on the context if the variables hold string value or a numeric value.

Step 1: First add a Button to the excel sheet as we have shown earlier. 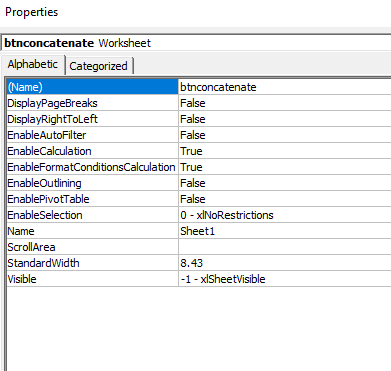 Step 2: Right-click on the button.

Step 4: You will get the code window as shown in the below screenshot.

Step 5: Write the following code in between Private Sub btnAdd_Click and End Sub as follows:

Step 8: Then turn off the Design Mode button.

Step 9: The indicator is, it will change into a white background from the greenish colored background, as shown in the below screenshot.

Step 11: Execute the above code, and you will get the output as shown in the below screenshot.

How To Create A Chart With Scrollbar In Excel

Use Sparklines To Show Data Trends In Excel

How to create a Pie chart in Word