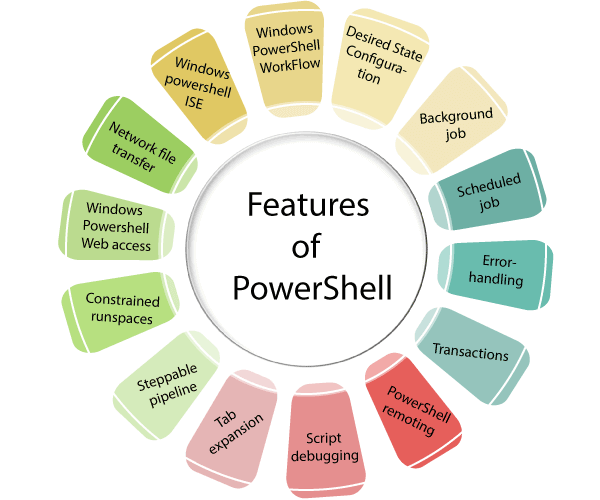 1. Windows PowerShell Workflow: Workflow capabilities have been introduced in Windows PowerShell version 3.0. It is designed particularly to help us by performing long-time and effort-consuming complex tasks across different and multiple devices at different locations.

2. Desired State Configuration: DSC is the feature of a Windows PowerShell which provides a collection of language extensions, resources, and cmdlets that can be used to configure the software declaratively.

3. Background job: Windows PowerShell introduced the concept of background jobs that run scripts and cmdlets asynchronously on the remote and local machines in the background without affecting the user interface or interacting with the console.

5. Error-handling: Windows PowerShell provides the error-handling mechanism through the Try{ }, Catch { }, and Finally {} blocks as in .NET language.

6. PowerShell remoting: This feature of Windows PowerShell allows the execution of cmdlets on remote systems which help to manage the set of remote computers from one single machine.

7. Script debugging: It is a feature of PowerShell to examine the script, function, command, or expressions while PowerShell is running. PowerShell script debugger includes the set of cmdlets which allow to set and manage breakpoints and view the call stack.

8. Tab expansion: Tab expansion is an implementation of auto-completion, which completes the cmdlets, properties, and parameter names by pressing the Tab key once.

10. Constrained runspaces: It allows the creation of PowerShell runspaces with the set of constraints which includes the ability to access and execution of scripts, cmdlets, and language elements.

11. Windows PowerShell web access: PowerShell console introduced a web-based version in Windows Server 2012. Here, we can run PowerShell cmdlets from any web browser which is not available on desktops but also on any tablet or mobile devices.

14. Transactions: This feature of Windows PowerShell enables us to start a transaction, to indicate which command is a part of it, and to either rollback or commit a transaction.

Next TopicHistory of Windows PowerShell

How to calculate ROIC in Excel