Below we will look at a program in Excel VBA which creates a Userform that converts any amount from one currency into another.

The Userform we are going to create looks as follows: 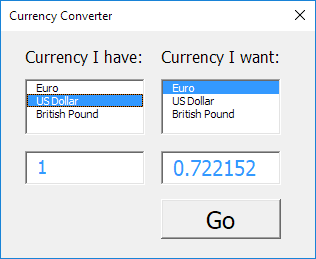 To create this Userform, execute the following steps.

2. Click Insert, Userform. If the Toolbox does not appear automatically, click View, Toolbox. Your screen should be set up as below. 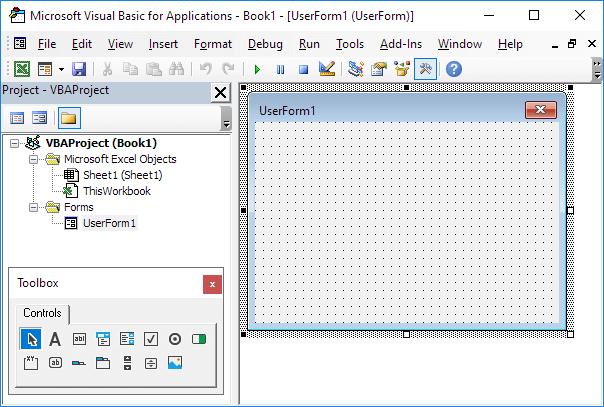 5. To show the Userform, place a command button on your worksheet and add the following code line:

We are now going to create the Sub UserForm_Initialize. When you use the Show method for the Userform, this sub will automatically be executed.

We have now created the first part of the Userform. Although it looks neat already, nothing will happen yet when we click on the Go button.

Explanation: first, we declare an array. The array has two dimensions. It consists of 3 rows and 3 columns. Next, we initialize each element of the array. For example, rates(1,0) is the currency rate from US Dollar to EURO. Next, we start a double loop. Depending on the selected currencies in the list boxes, Excel VBA converts the amount entered in the first text box and displays the result in the second text box. 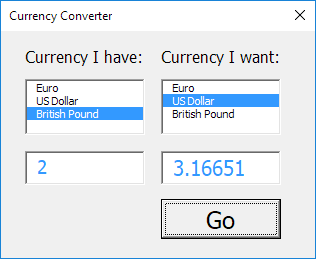 3/11 Completed! Learn much more about userforms >
Next Chapter: Range

How To Insert Togggle Button In Excel

Calculating sine and cosine of an angle

How To Calculate Length Of Service in Excel