If you have ever worked with MS Excel, you have seen that the data is split into multiple columns in an Excel sheet. The user may sometimes need to combine the multiple columns of data into one. These columns can be blank or with data. Excel allows the users to merge the columns and the data that resides inside them.

How to merge columns?

There might be many situations where you need to merge the columns, such as first name and last name, into one. Another is combining the city, state, country, and Postal code into one Address column.

Excel provides the Merge cells option to merge the cells data. But it only keeps the upper left value between the selected value and discards other. So, the data will lose by using this method.

This is a simple example of merging two columns of data into one column. This method is good, but the data is lost if you merge the cells with data. It is useful for merging the columns before inserting the data. Following is a set of data split into multiple columns.

Step 1: See the following data having two columns named First name and last name. We will merge these columns data into one, i.e., Name.

Step 2: Select the A2 and B2 cells to merge and click the Merge & Center, then choose to Merge Cells inside the Home tab. 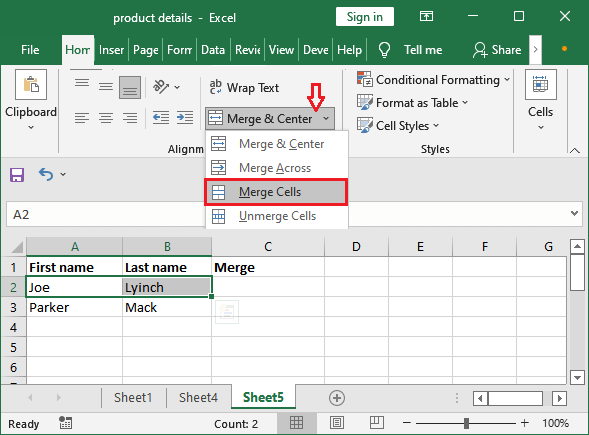 Step 3: A error message will appear that says only the upper left value will keep and other values will be discarded. If you still want to merge the cells, click OK.

Step 4: See that the selected cell has been merged, but the data has been lost. Only first name is kept and the last name has been discarded.

Another method to merge the two or more columns is using & (ampersand symbol). Excel users can use it to merge the two column’s data. The resultant value of merged columns is stored in a new column. The data does not lose when you combine the cells data using this method.

This method’s main drawback is – it cannot combine multiple cells of two columns at once. It merges cells only one-by-one means that the entire column does not merge at once. You have to use this method multiple times to combine the entire columns data.

With the help of the below steps, you will learn & operator can be used to combine columns.

Step 1: We have the first name and last name in column A and column B. We will merge these columns of data into a new column.

Step 2: In a new column C, write the below formula in C2 cell.

Step 3: Now, when you hit the Enter key, you will get the data of cell A2 and cell B2 data combined in C2 cell.

Step 4: By applying this formula to the entire column one by one, you will get the merge result for column A and column B in column C.

It will not be calculated at once. The Excel users need to explicitly apply this formula for all cells to get the entire columns merge.

Step 5: Now, if you delete the First name (A) and Last name (B) columns. You will get the following #REF! Error like in the below screenshot.

This error occurs because the combined data is obtained from column A and column B references.

Step 7: On the same column, right-click on column C and select Paste Values (V) under the Paste Options. 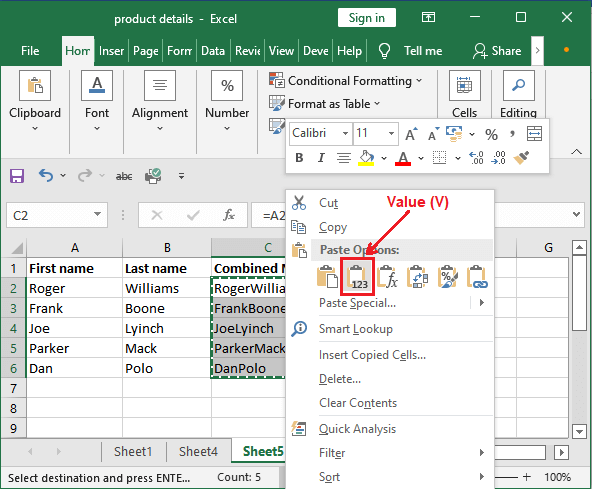 Step 8: Now, you can delete the reference columns from which you get the merged data in column C. See the result after deleting. 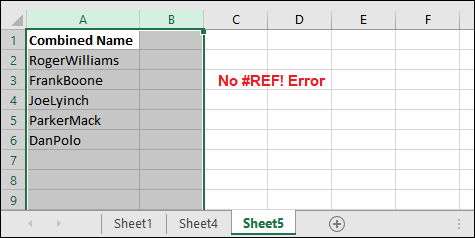 In the above example, we had used & operator to combine the two cells data to merge the columns. Excel also offers CONCATENATE() function using which the user can merge the cells data.

CONCATENATE() function works in a similar way as ampersand (&) operator. You can not only combine only two cells but more than two cells into one. Let’s see how this function works to combine the columns data.

Perform the given steps below on your data:

Step 1: We have the first name and last name in column A and column B. We will merge these columns of data into a new column.

Step 2: In a new column C, write the below formula in C2 cell.

Step 3: Now, when you hit the Enter key, you will get the data of cell A2 and cell B2 data combined in C2 cell.

The formula is placed in one cell. You can auto-populate it by dragging this formula in the below cells.

Step 4: By applying this formula to the entire column one by one, you will get the merge result for column A and column B in column C.

Besides all the above methods, there are also online tools like Kutools, using which you can merge the columns.

Why prefer CONCAT or & to merge columns?

How to calculate number of days between two dates in Excel