The For loop is also known as a ‘For‘ statement in a PowerShell. This loop executes the statements in a code of block when a specific condition evaluates to True. This loop is mostly used to retrieve the values of an array.

Syntax of For loop

In this Syntax, the Initialization placeholder is used to create and initialize the variable with the initial value.

The Condition placeholder in a loop gives the Boolean value True or False. PowerShell evaluates the condition part each time when this loop executes. When it returns a True value, the commands or statements in a command block are executed. The loop executed its block until the condition become false.

The Repeat placeholder in a loop denotes one or more commands which are separated by commas. It is used to modify the value of a variable which is checked inside the Condition part of the loop.

Flowchart of For loop 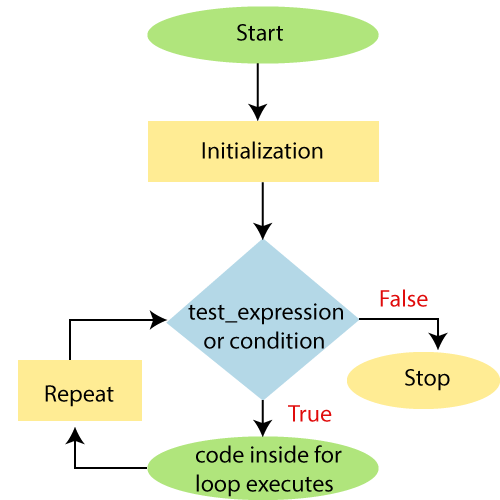 Example1: The following example describes how to use a ‘for‘ loop in PowerShell:

In this example, the variable $x is initialized to 1. The test expression or condition $x less than 10 is evaluated. Since 1 less than 10 is true, the statement in for loop is executed, which prints the 1 (value of x).

Example2: The following example describes the loop which prints the string values of an array in PowerShell:

Example3: The following example of for loop displays the same value of variable repeatedly until you press the key: ‘ctrl+C‘ in PowerShell.

Example4: The following example prints the even and odd number from 1 to 30 in a table form.

How To Fix Not Enough Memory Issue in Excel

Convert Numbers to Text in Excel