This code is used to add the numbers from 1 to 10. The result is then stored in the variable numbcount. Now this looks pretty easy and simple right. But now suppose instead of the first ten number you want to add numbers 1 to 1000, now are you going to write all the numbers and then add them? Of course you can but that would become tedious right. So what do we do? It’s easy actually we use the handy programming tool called “Loop”.

Loop as the names sound is something that goes on and on until you tell it to stop (this is called a “condition”). You set a starting number for your loop, an end condition, and a way to get from the starting number to the end condition. In VBA, there are four types of loop to choose from: For loops, For Each loop, Do Loops, and While loops. We will focus on the DO WHILE loop for now.

First let’s look at the syntax of the DO WHILE LOOP:

Explanation: First you declare the DO WHILE loop by writing “Do While” followed by square brackets in which you write a condition. This condition will be used to end your DO WHILE loop.

Here is an example for you to understand the syntax better:

Explanation: This code will increase the value of a variable called count by 1 and then store the value in the same variable count. This loop will keep on going again and again until the condition statement is true meaning until the value of count is less than equal to 5. Now let’s see how to use the Do WHILE loop. Follow the steps below:

A new window (Visual Basic Editor) will open which would have a dialog box in the center. You will write the code in the dialog box.

Write the following line of code in the dialog box

After writing the code close the window by clicking on the cross(x) icon the the upper right side of the screen.

Explanation: In this code we have declared a variable “counter” of data type integer and has assigned the value 1 to it. We used the DO WHILE loop with the condition to count from 1 to 4 and store the value in cell D.

After writing this code close the window (visual basic editor) by clicking on the upper right cross button.

This is the result. You have now successfully used a DO WHILE loop. 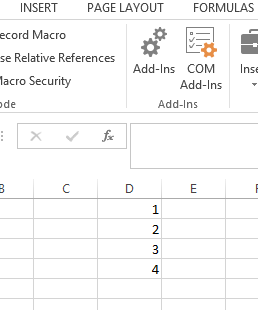 How To Insert Togggle Button In Excel

How To Calculate Efficiency in Excel

Numbers to Text in Excel

How To Remove Cell Border Color in Excel

Run Code from a Module in Excel VBA